Mourinho says his methods are ‘second to none’, but some Spurs players disagree

Mourinho says his methods are 'second to none', but some Spurs players disagree

Some Spurs players are unhappy with Mourinho's training, which focuses on nullifying the opposition rather than developing an attacking plan

Mourinho says his methods are ‘second to none’, but some Spurs players disagree

After Tottenham lost their fifth Premier League game out of six, Jose Mourinho insisted that the methods that he and his coach staff use are “second to nobody in the world”. But the reality inside the Spurs dressing room is that some players are unhappy with training sessions they think are too defensive, too focused on the opposition, and not as intense as they were used to under Mauricio Pochettino.

The Athletic has learned from multiple dressing room sources that although Mourinho has not lost the whole dressing room yet, some of the team are increasingly unhappy with his approach. This disquiet is starting to tell in terms of results. Having started the season brilliantly and been top of the Premier League in December, Spurs have taken just 12 points from their last 12 league games. They have sunk to ninth in the table, raising questions about the direction under Mourinho.

It is 15 months since Mourinho replaced Mauricio Pochettino. And while the Argentinean’s relationship with the players had broken down by his sixth season at the club, some senior players now look back fondly at that era. A section of players who used to complain about Pochettino’s double sessions and rare days off now wish they were working harder, although the impact this COVID-19-affected season is having on training loads cannot be ignored.

Some of the attacking players, who feel that Mourinho’s training is too focused on defence and on not making mistakes, are unhappy with how little focus there is on coaching complex offensive patterns. Some attacking players have even remarked privately that they are still reliant on moves and finishes in the final third that they learned and honed under Pochettino because there has been so little detailed attacking work under Mourinho.

Fundamentally, this comes down to a difference in approach between Pochettino and Mourinho. Pochettino’s whole philosophy came down to a positive, dominant style of play, the positional game, and his training was built around helping his players to understand it, to play it and to perfect it.

Mourinho’s whole approach is different. Rather than mastering one particular style of play, he is focused on developing and executing a different plan for every opponent. This means that training is largely focused not on Spurs’ own game, but on how to exploit the weaknesses in whomever they are playing next. Training will be tailored towards the specific scenarios Mourinho expects to face, and the mistakes he does not want his players to make or does want to trigger in the opposition. Players have remarked that as they get closer to every game, the atmosphere is increasingly based on fears of what might go wrong, and Mourinho’s insistence that the players must be careful at all times, only playing out or taking risks under certain circumstances.

At times, this pragmatic work has proven useful, as the players have developed gameplans that have proved successful. Mourinho has recorded impressive counter-attacking plans that have brought wins against Manchester City, Manchester United and Arsenal, masterclasses in reactive football that took Spurs to the top of the table. But at times, some players have grown bored and frustrated with how much time Mourinho will focus on one particular aspect of the game — hours spent working on how to defend throw-ins when they are preparing to face Liverpool, for example, or on perfecting attacking crosses from deep positions before playing West Ham United. One source said the players are at risk of a “tactical overload”.

So much attention on nullifying the strengths of the opponent means that Tottenham do not focus as much time on developing and improving their own attacking game. The priority is defence and counter-attack. Numerous sources say this is why Spurs’ attacking football has looked limited at times this season because there is no plan for how to build out from the back, play through the thirds and create chances in the opposition box.

In that sense, it is the polar opposite of how Pochettino works. Now in charge of Paris Saint-Germain, he always had a clearly structured method for moving the ball forward from one end of the pitch to the other, how the goalkeeper plays the ball, where the centre-back splits and drops to, where the full-back moves to, and so on. With Mourinho, there is no such coordinated plan. “Everything has changed, even the training is so defensively minded now,” one dressing-room source says. “There is no plan to move the ball forward. The plan is to defend, boot the ball up to Harry Kane and Son Heung-min, and that’s it.”

This is an issue that has followed Mourinho around his last few jobs. He has been routinely accused of not coaching attacking patterns in the way that his modern rivals do. Jurgen Klopp, Antonio Conte, Pep Guardiola and Pochettino all work in this way, instilling patterns that help their teams unpick opponents in the final third. Mourinho’s own approach of “guided discovery”, hoping his players would be good enough to find the right combinations, has worked when Kane and Son have been at their best, as proven by some incisive counter-attacking performances earlier this season. But it also has its limitations, as shown by Spurs’ struggles to create good chances against deep-lying defences. 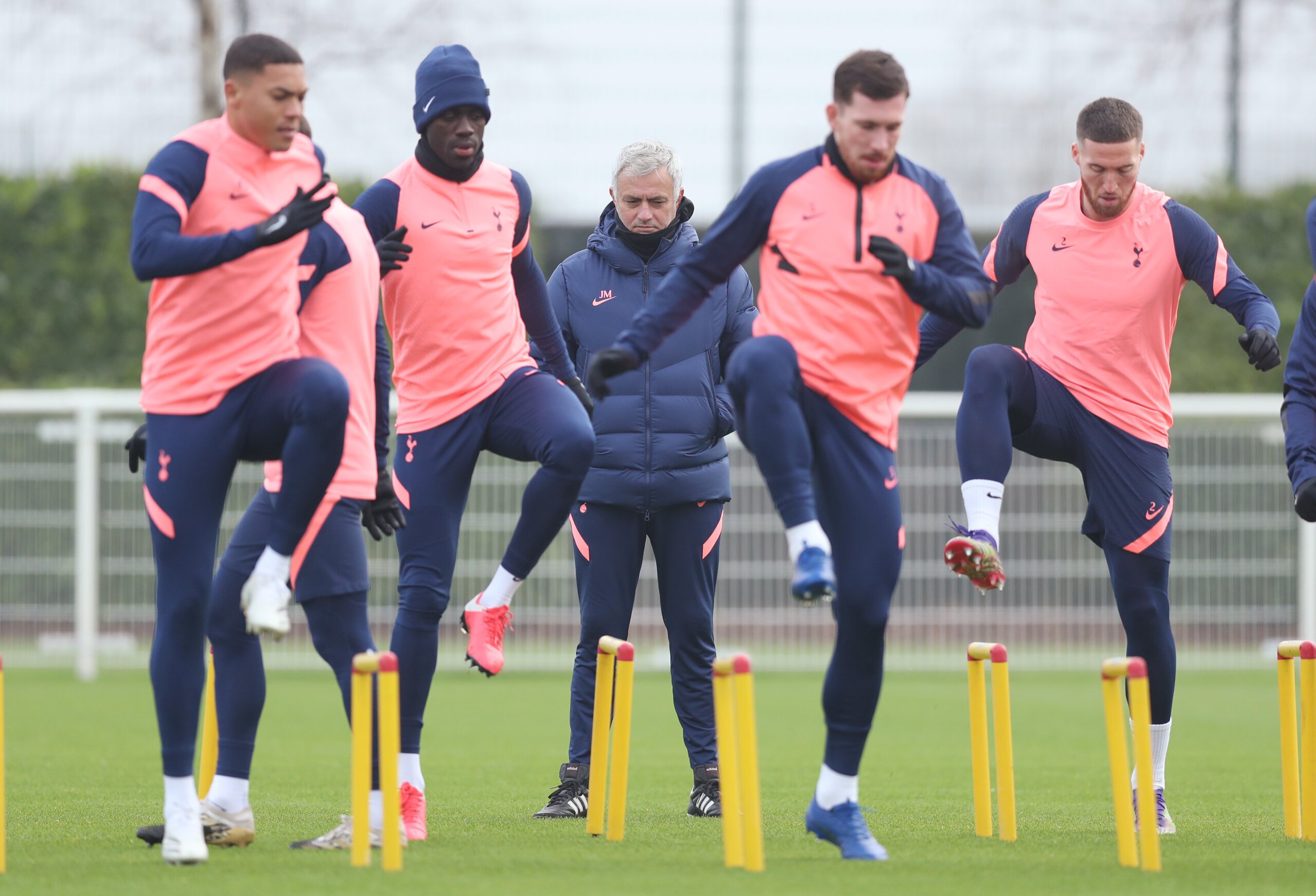 The other major change between Pochettino and Mourinho concerns workload and intensity. Pochettino worked the players famously hard, with hardly any days off and double sessions pencilled in every time the players had a free week. It was necessary to get the players fit enough to play Pochettino’s style of play, but there is no point pretending that the players enjoyed it at the time. They did not, and often complained about the workload, especially during the end of Pochettino’s tenure.

Mourinho’s approach is different. Players have noticed that there are fewer double sessions than before, and more days off, with days off sometimes used as a reward after victory. Multiple sources have questioned whether the intensity of Mourinho’s sessions can ever replicate match situations. When Spurs finally had a free week in the build-up to the FA Cup game against Wycombe Wanderers on 25 January, some of the players were relieved to have finally been worked hard.

Of course, Mourinho is operating in the unique circumstances of the COVID-19 pandemic. There were only five weeks between the end of the last Premier League season and the September 2020 international break. They have already played 40 games in all competitions so far this season, with the possibility of another 23 to come if they go the distance in the Europa League. They have played more matches than any side in Europe’s top five leagues this season, so Mourinho has been forced to manage the physical loads of his entire squad to keep them fit through an exhausting calendar. No team in the world is training or playing as intensely now as they did before the pandemic.

Another view is that this was a team that was in decline before Mourinho arrived, whose declining performances in the Premier League in 2018-19 were masked by their unlikely run to the Champions League final. And that Mourinho’s job of transforming the mentality of these players, most of whom were here under Pochettino, still needs more time to deliver consistent results. Spurs are in the Carabao Cup final, almost in the Europa League last 16, and not out of European contention in the league. This season can still end well. Mourinho’s first season at Manchester United was not much fun at points but it still ended with the League Cup and Europa League trophies, and a place in the following year’s Champions League.

But ultimately, right now, Mourinho’s mixture of analysis, defensive work and tactical drills designed for each opponent is not prompting the right response in the Tottenham players.

When Mourinho was asked last Wednesday what he would be doing in training to iron out the defensive errors that have undermined Tottenham’s season, he replied that he would be sending the players more clips on their phones for them to mull over, before more individual analysis meetings and then a session to prepare them for Wolfsberger AC in the Europa League.

“Everything we can, everything we can,” Mourinho said. “Starting with players receiving on their own phones and iPads immediately analysis of all the situations. So they can read, they can analyse by themselves. Then the individual meeting analysing every situation and trying to improve every situation. Then on the pitch, we managed to have two good training sessions today and yesterday. Yesterday, they had individual work with (first-team assistant) Ledley King and the staff. And then today, we had a collective session in relation to the game tomorrow. Work: that’s the only thing that we can do to try to improve.”

But Tottenham’s decline in form recently suggests that Mourinho’s methods are not having the desired effect, despite what he said in his press conference after the West Ham game on Sunday.

When Mourinho arrived in English football in 2004, he was a revolutionary. His approach of tactical periodisation, with everything geared towards the game itself, had been very successful in Portugal and worked just as well in England too. Players loved the fact that everything Mourinho did had an application, and everything was with the ball. His methods were wildly successful: Chelsea won the 2004-05 Premier League, 95 points, 15 goals conceded, before retaining it the following era.

That was almost 17 years ago and other coaches now think that Mourinho’s rivals have caught up with him. The idea of all training being with the ball is no longer new, especially as other managers set new standards for technical football at the top of the league.

Mourinho’s other great strength when he first arrived, of meticulous attention to detail and rigorous analysis of his opponents, has itself been eroded now that every Premier League club has its own analysis department.

And then Mourinho’s powers of motivation, the psychological tricks and games he plays with players to provoke the right response — what he calls “confrontational leadership” — have consistently shown to be less effective with this generation of players than they were with his great Chelsea, Porto and Inter Milan teams. At Spurs, Tanguy Ndombele has responded well to Mourinho’s methods, and Kane, Son and Pierre-Emile Hojbjerg have shone this season, but plenty of other players have plateaued or declined since Mourinho took over. This generation of players does not always respond to psychological triggers as the last generation did.

Mourinho now finds himself — 15 months, three transfer windows, and 75 matches — into his Tottenham reign, complaining that there are “problems in the team that I cannot resolve by myself as a coach”. And yet he must also know that the only route out of this situation is to win games. We will all know soon enough whether Mourinho’s coaching methods remain as good as he still thinks they are.